This year has brought many new and interesting experiences, as well as teaching me a lot about myself. I have always cherished time spent alone, but thanks to this year away, I have discovered that quality alone-time has a definite limit. I have had to be more pro-active than usual in seeking out the company of others, and more open minded about the types of social interaction that I might benefit from.

Having never really used any form of social media before this year, I thought a year away would be a good reason to start. Several friends wondered about keeping in touch with me, and I didn’t think I would be able to spend time emailing with everyone (this was before I had figured out phoning people for free with WhatsApp or facebook messenger). My unused facebook account had lain dormant for several years, so I reactivated it and started collecting a few friends. It took me a little while to figure out sharing photos and posting and all that, but I learned with practise.

I have met many new people this year, and quite a number asked me to be facebook friends with them. I had heard terrible things about facebook: that it causes feelings of envy and depression, and that people only post positive things, rather than an accurate picture of their lives. But we’re all like that most of the time, aren’t we? Truthfully, what you are reading on this blog is a distillation of the most positive and interesting events of my year. Of course you’re not generally going to hear about the times I felt sluggish or depressed, or frustrated by a difficult conversation. Anyway, people my age tend to post informative articles from news sources, rather than just their own photos and opinions, or what they ate for lunch.

Using facebook has been absolutely fascinating. If used judiciously, it makes an ideal break from composing and can completely refresh my train of thought. Many people have different personalities on facebook, as compared to real life. Some of my best friends are, I hate to say it, somewhat dull on facebook, and the corollary is also true: people with whom I’m not particularly close in real life share some great articles. You really find out what’s important to people, and indeed, to a whole culture, by what they post. I learn a lot about Latvian women, for example, when they share articles with titles (translated from Latvian) such as: “We have exactly the man that we have earned” or “The measure of a woman’s worth is the man that she loves.” Looks like we’re stuck in the 1950’s here, in many respects. I guess I knew that already, since I reported on it in my second blog post, but I still find it very uncomfortable. At least when it’s on facebook I can come to terms with these types of attitudes privately, rather than having my jaw drop and smoke come out of my ears right in the middle of a conversation (which has happened more than once this year!) Yet, another article that also came to me via facebook and was widely shared by my Canadian Latvian friends, reports that women make up 60% of doctoral students in Latvia, which is the highest percentage in the world. This seems totally crazy! Latvian women are so educationally advanced that they are much more likely than Latvian men to enroll in a PHD program, and yet many still openly define and value themselves in terms of the men in their lives. Bizarre but fascinating, and I would never have known about any of this without facebook.

The music resource groups on facebook are amazing. The groups I belong to, “Music Engraving Tips” and “Sibelius Software Forum,” have saved me hours, if not days, of poking around in books and on the internet finding answers. After my post on the permanent media blackout here in Latvia, I started following the Canadian national newspaper, The Globe and Mail, to get some proper news. I had actually never understood what the big deal was about media literacy before using facebook. You see some pretty bizarre stuff, as well as a lot of people who obviously believe it (to be honest, the whole year in Latvia has been kind of like that). To counteract this growing media problem I recently subscribed to full online access at The Globe and Mail, in order to financially support the shrinking field of trustworthy news sources. I urge you to do the same with your local newspaper!

This blog has also been a major lifeline for me. I don’t usually talk about myself that much, but I knew that this year so many people would want to hear about my experiences, that this seemed an efficient way to have that happen. However, it has also positively added to my personal processing of the experiences themselves, since I need to work through them and understand them more deeply, in order to comfortably explain them to others. This has been quite psychologically healthy for me. The blog is not very widely read, mostly because I have never added any tags, which would be found by search engines. To date there are 19 posts and a total of 1300 page views. Probably half of those views are of the main page, which is what I link to from facebook. I’m actually just as happy that it’s not that widely read, as it is quite personal. From the beginning, this blog was created so that people who know me personally can read it during my year away, and I anticipate that it will simply fade away when I can happily speak to you all in person again.

Having a long distance marriage has been weird. We were apart from September 20th to December 5th, and then from January 14th to March 21st. During the fall semester I was so busy with all my classes and with worrying about the US election, that I barely noticed my husband’s absence. Actually, I told myself, in a way it was good that he wasn’t around, since he would just have distracted me from my work. It’s true, I got a lot done, and I went on pretty well like that until late November when the darkness started closing in, both literally and figuratively. Indeed, I had turned into a person who only worked. I had almost no social life, no husband, no children, no family and no close friends. I found it hard to even remember in detail what my previous life was like. I was becoming concerned at my lack of feeling, like I didn’t even really miss them all that much, not even my husband or daughter. They were all so far removed in time and space that it felt like they weren’t even real. Andris was due to arrive in Latvia December 5th, and I had told him that I would need to keep working at almost the same pace, so I hoped he wouldn’t feel too neglected. That was fine, he said, since he had several days of consulting work lined up anyways.

Gradually over that first week, we got to know one another again, and got used to living as a couple again. I had completely forgotten how utterly charming he is. How nice it is to share meals and conversations. How he understands and shares my fact-based, scientific approach better than anyone in this entire country. My frozen, shrunken world thawed out and took in oxygen, and I felt like myself again. Not that I had ever really wondered about it, but it became crystal-clear to me exactly why we had fallen in love and married years ago, and now, 16 years later, I happily fell under the same spell all over again.

I won’t be posting during the next few weeks, because we will be in Asia on a cruise! We planned it and put down a deposit over a year ago, before I had even thought of coming to Latvia for this year. We wondered if we would have to postpone or cancel it, but my looser schedule this semester is able to accommodate my three week absence from Latvia. It will be a wonderful contrast to the cold, dark northern winter that is just ending. See you all in late April! 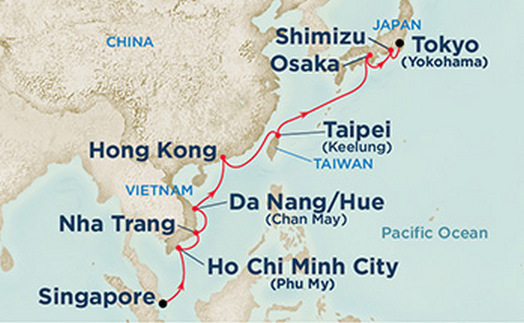 Spending a year or two in Latvia studying composition and Latvian language! View all posts by Erika

6 thoughts on “Keeping in Touch”